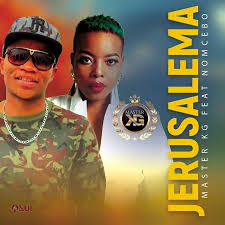 Some of the places where the song is being played globally, as people happily dance away their troubles, are located in the most hallowed settings such as seminaries, monasteries, churches, schools and hospitals!

This just goes on to give you a glimpse of the phenomenal rate at which the song has been growing, all thanks to the now famous #JerusalemaDanceChallenge. Calling it growing in leaps and bounds could be an understatement.

Early last year I was tasked to write an article featuring New Gqom Songs that were likely to hit in the year 2019. The feature dubbed “The List of New Gqom Music 2019” was meant for a South African online digital news and entertainment platform.

What is Gqom music?

For those in the dark, Gqom is the most sought after genre of music to have originated from South Africa in recent times. The delicate blend of Durban kwaito and house sub-elements has taken global music lovers by storm. Gqom is known for its hard-hitting, unusually heavy and spellbinding beats, which often leave listeners in a trance.

Suffice to say, the article I wrote did well and went on to attract over 100,000 readers in a couple of weeks. Consequently, in February this year, I was once more requested to do a similar article dubbed “The List of New Gqom Music 2020.”

In the course of my research for the article, I came across a newly released Gqom song, by Master KG, featuring Nomcebo, titled “Jerusalema.” It immediately caught my attention, not just because its video on YouTube had garnered about 6 million views – in just two short months – but, largely because I thought its beats and powerfully captivating vocals were out of this world.

I found myself listening to this newly released gem about ten times in a row, yet I could not have enough of it! I had a hunch that finally, here was one monstrous African hit, waiting to hit the world like dynamite.

My son Ray, who was about to turn nine in four or so months, noticed that I was listening to the same song on my laptop over and over. He asked me why.

I paused and held my chin like one of those sages from ancient Greece, before telling him what was in my mind, “Young man, listen carefully. Here is a huge hit song that will literally explode in the near future.” I went on to let him have a taste of it, obviously expecting him to get excited like I was. I was dismayed when all he could say was, “Sometimes I don’t get you dad! Is this what you are calling a hit song?”

The decades’ long generational gap between son and dad was suddenly too evident. It occurred to me that, from my excitement, the young chap was expecting some Ariana Grande club banger … or something of the sort. The songs that this young generation of today listen to yawa…! Only God can come to their rescue.

I went on to explain to him that there was something really special and sacred about this song “Jerusalema”, but he still seemed lost. I gave up and let him go about his business, as I went back to wallow in my newfound fascination with this new amazing song.

Words alone cannot not even begin to describe the strange spell the song casts on the listener. It is no wonder that all the characters in the song’s video look like people possessed by strange powers. Dressed in a flowing black dress, Nomcebo’s vocals, which dominate the song from beginning to end, are simply hypnotizing. The black dress and her powerful voice make her look like some eerie deity from the dark ages.

Nomcebo’s mesmerizing voice, coupled with the pulsating and infectious beats – only unique to Gqom music – make the song sound deeply spiritual. One doesn’t need to understand the isiZulu language (in which the song is written and sung) to realize that this is not just a song, but a solemn prayer, earnestly made to a higher supernatural power. The first stanza of the song below confirms this.

Uhambe nami (Walk with me)

Zungangishiyi lana (Do not leave me here)

Uhambe nami (Walk with me)

Zungangishiyi lana (Do not leave me here)

Mbuso wami awukho lana (My kingdom is not here)

Zuhambe nami (Walk with me)

When Was the Jerusalema Song Officially Released on YouTube?

Let’s cut to the chase. Do you know who sang Jerusalema? Here is what I wrote about the song “Jerusalema,” which I ironically placed at number 4 of my top ten list of Gqom music, back in February:

“Having attracted over 6 million views in less than two months since its video premiered on YouTube, on December 13, 2019, “Jerusalema” is the true definition of a hands down smash hit. Master KG has once more confirmed that he is an unrivalled African entertainment royalty…

In this electrifying tune, he combines his unique talent with the soulful vocals of Nomcebo Zikode to produce one of the greatest dance anthems of recent times. The club banger promises to keep Gqom lovers dancing and highly entertained throughout 2020.”

Five months later, my prediction about the song not only came to pass but surpassed my wildest imaginations. Last month, when I checked out the song on YouTube, it had over 50 million views. Believe it or not, in four short weeks, the humongous hit song has doubled the 50M and is now doing over 100M views, with no signs of slowing down anytime soon.

By August 27th, it had 102.4 million views on YouTube. By August 28th evening, the views stood just over 103.5 million, by August 30th morning the views were 106.4 million and still counting. That is a whopping four million plus views in three days! This just goes on to give you a glimpse of the phenomenal rate at which the song has been growing. Calling it growing in leaps and bounds could be an understatement.

What is the jerusalema dance challenge? you might be asking. The #JerusalemaDanceChallenge began when people started recording their own creative dance moves, while dancing to the Jerusalema song. However, the original jerusalema dance steps are still maintained in most of these dances. Below, Bird’s Eye View samples some of the most popular jerusalema dance videos online today. The  videos are not arranged in any order of popularity or number of views on YouTube.

Apparently, the recent spike in the song’s popularity is all thanks to the #JerusalemaDanceChallenge that has taken the world by storm. Master KG and Nomcebo have been riding on the crest of a wave, with the world literally dancing to their hit music, amid a serious Covid-19 pandemic. People around the globe can’t stop downloading the jerusalema official dance video.

Who Started the Jerusalema Dance Challenge?

Master KG says the dance challenge that has sparked a serious craze across the globe started in Angola, when a group of friends who were just having a good time, recorded a video of the dance choreography, which has since gone viral. For those who have been wondering how the jerusalema dance challenge went viral, there you have it.

Without a doubt, the viral “Jerusalema Dance Challenge” now has the world seriously shaking a leg, injecting tons of positive vibes into the gloomy Covid-19 situation.

Jerusalema Dance Tutorials are now available on YouTube and in reputable Dance Schools across the globe, just for the sole purpose of teaching Jerusalema dance moves to those interested in learning how to dance to this huge hit song.

From Cape Town – SA, to Budapest – Hungary; from the streets of Nairobi-Kenya to the hospital hallways in Sweden and France; to public places and rooftops in Romania; to Italy, Canada, the UK, Jamaica, Tanzania, and the breath-taking beaches of Cape Verde; people can’t stop dancing to the highly infectious beat of “Jerusalema.”

A remix of Jerusalema, featuring famous Nigerian singer “Burna Boy” was released on 19 June 2020, propelling the song right onto the US Billboard charts. The song topped the UK Afrobeats Singles Chart on the issue dated August 15, 2020. It has since held the number one position for over two weeks now. However, currently, only the audio track of the remix featuring “Burna Boy” is available on YouTube.

Facebook, Twitter and TiTok have all gone berserk with thousands of people posting videos of either themselves or others performing the #JerusalemaDanceChallenge. The original song is currently over 106.4 million views on YouTube and shows no signs of slowing down or (to put it in the Covid-19 lingo) – no signs of flattening the curve, anytime soon.

Other countries whose streets have been recently lit with the #JerusalemaDanceChallenge include Germany, Austria, Spain, Belgium and Portugal. The song even boasts of a Spanish version!

Different folks across the globe have been coming up with creative jerusalema dance moves and posting their videos online. Here is yet one more of the hottest choreography moves on YouTube, for the Jerusalema Dance Challenge, straight out of Europe.

This smashing hit is without any doubt destined to go places. With more and more people dancing to it across the globe; with Jerusalema dance tutorials now being taught all over the world, it can only grow bigger. The more jerusalema dance videos keep on going viral, the more the song keeps on blasting from several speakers across the globe.

Jerusalema is a purely African song that has claimed its rightful place and respect on the international arena. South Africans have never let the continent down in the entertainment industry and in many other fronts. Their vigorous and almost violent signature dance moves are in themselves a whole story for another day.

One of the common jokes in Nairobi is that if you stay too close to a South African who is dancing to Gqom music or doing a traditional jig, you are likely to end up in the serious accidents casualty section of the nearest hospital – with a dislocated jaw. That would be after one of the dangerous judo-like kicks, flying from the happily dancing person, accidentally lands on your jaw.

Jokes aside, Jerusalema is one of those songs that make you feel proudly African. My hat remains off; my head remains bowed; in respect for the song and its singers. Some of the places where the song is being played globally, as people happily dance away their troubles, are in the most hallowed settings such as seminaries, monasteries, churches, army barracks, schools and hospitals!

The song has definitely been one huge antidote to the pain that Covid-19 has visited on the globe. The more people keep joyfully dancing to it, the bigger the song becomes. Just watch this space.