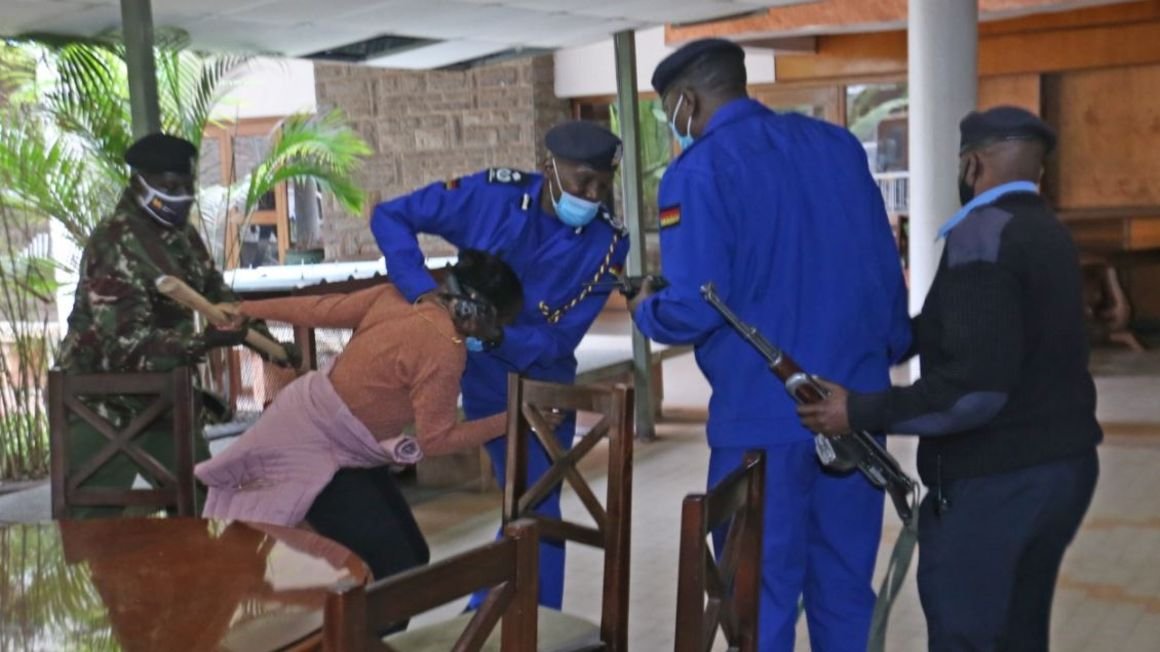 On Tuesday, four police officers (all men) were caught on camera, mercilessly raining blows and kicks on an unarmed and helpless woman, within the precincts of City Hall. This woman was none other than Mlango Kubwa ward Member of County assembly (MCA) Patricia Mutheu.

Patricia Mutheu’s brutal beating, by policemen, which was caught on camera yesterday, has sparked a huge  outrage from Kenyans on social media. The four policemen pounced on the lady member of Nairobi County assembly and brutally bludgeoned her with heavy kicks and blows, as they shoved her and dragged her around. They beat her to a pulp.

Many Kenyans were of the opinion that this is totally unacceptable in the 21st Century, especially in a country that claims to respect the rule of law. Whatever the crime this lady committed, she did not deserve to be brutalized so savagely like this! In this case, her only crime seems to have been, just reporting at her place of work!

It doesn’t matter what side of the political divide she belongs to. The dehumanizing beating that this lady got in the hands of four policemen, who are ironically supposed to safeguard the rule of law, is simply despicable. Period. Anybody citing the lady’s political affiliation to justify her unwarranted brutalization is a worse misogynist than those four criminals who beat her up.

Why was Patricia Mutheu Beaten up By Police?

The incident occurred after chaos erupted when a section of Nairobi MCAs allied to Governor Mike Sonko attempted to serve the Nairobi County Assembly Speaker Beatrice Elachi a notice of an impeachment motion against her.

The MCAs allied to Sonko also wanted to serve Ms Elachi with a court order suspending the appointment of Edwin Gichana as the new County clerk. This is a clear indication that the power tussle between governor Sonko and the director of Nairobi Metropolitan Services (NMS), General Mohammed Badi, is far from over.

Governor Sonko has recently accused General Badi of militarising the capital. He has since vowed to move to court to fight the deed, which he personally signed to transfer key services in the capital (such as health) to the NMS.

Several women leaders led by Chief Administrative Secretary (CAS) Public Service and Gender Affairs Rachael Shebesh have since condemned the inhuman manner in which MS Patricia Mutheu was beaten up by the police. Shebesh and Jubilee Nominated Senator Millicent Omanga have accused Elachi of sponsoring violence on her fellow woman.

Shebesh accused Elachi of orchestrating the fracas that saw police beat up Mutheu, saying the Speaker had let down women leaders. She called out police officers for unnecessarily applying excessive force on unarmed citizens.

“It is unfortunate that in this day and age we have police officers have lost respect for women. The sight of the officers ganging up to beat an unarmed woman is uncalled for and these officers need to face the law,” Shebesh said.

“She has refused to respect almost 11 court orders and it is unfortunate that police officers have accepted to be used. She has decided to run the assembly like a personal salon,” Omanga stated.

I can’t believe that we still have a number of dangerous Neanderthals, roaming around dressed in the Kenya Police uniform! It is obvious that the much talked about Police Reforms resoundingly flopped. Action must be taken against these savages, if the Kenya Police Force is to save what is left of its face (if at all it has one).

Looking at the the video clips and photos documenting how Patricia Mutheu was brutally beaten up, one can’t help but ask several rhetoric questions:

Even though the Office of the Director of public prosecution (ODPP) has directed IPOA and DCI to probe the incident, the damage is already done. The case might just end up like the many other previous police brutality incidents in which no action was taken against the perpetrators.

We can now safely conclude that the Kenya Police is far off from becoming the reformed and disciplined force that was envisaged in our 2010 constitution. It is a big shame that this force keeps taking one step forwards followed by several leaps backwards, in terms of reforms.