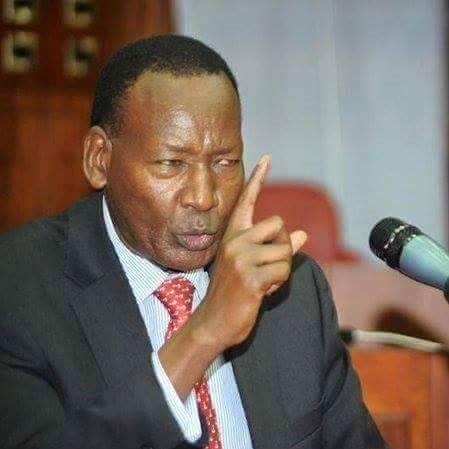 The no-nonsense CS for Interior Joseph Nkaissery is no more. Indeed death, the grim reaper, is indiscriminate and has no respect for any human being. It plucks both the lowly and the mighty; the ripe and the unripe – with the same zeal and in equal measure. Bird’s Eye View has gathered that, after attending a prayer rally at Uhuru Park yesterday, the fallen CS accompanied the president to a political rally in his Kajiado home backyard where he seemed to be in robust health.

The retired major general is said to have arrived home at around 9 pm, changed into a tracksuit, and worked out for a short while before hitting the shower. However, after having his supper, he started complaining of dizziness and chest pains before he collapsed and was rushed to Karen Hospital. On arrival at the hospital, he was immediately admitted and put on a life support machine. Unfortunately, the CS breathed his last and he was pronounced dead moments later.

The CS’s sudden demise has immediately triggered an online storm of mixed reactions with thousands of Kenyans expressing their shock and sending messages of condolence to the fallen general’s family. However, typical Kenyan style, it is really unfortunate that our political differences must take centre-stage even in death! It is sickeningly sad to see some people celebrating the death of the CS, on social media, and reserving only the most unkind words for him. Regardless of his transgressions, I think it is totally insensitive and absurd to wish death on anyone just because they politically belong to NASA or Jubilee.

I obviously have an issue with those who think that Joseph Nkaissery’s death is God’s punishment for his political beliefs. It is idiotic and plainly childish to hate people, even in death. Just because of political differences? Hell no! The many people hating on general Nkaissery after his demise are simply inhuman. Never play God and judge the departed souls harshly. You can never tell their relationship with God when they breathed their last, neither do you know their hereafter. Most importantly, you never know what will hit you or your loved ones in the next minute.

Remember even metals do rust and you are no metal. Strange things happen in this world. Your hearty laughter this minute might turn into bitter tears in the next one. It costs you nothing to wish your enemies, (both real and perceived) well when death strikes. If you really hate the person, never be insensitive to the innocent family members. When are some people going to grow up?

Bird’s Eye View has just learnt that President Uhuru Kenyatta has appointed Dr Fred Matiang’i to temporarily replace the fallen general as CS for Interior in an acting capacity. That is the sad reality of life. You die, you are immediately replaced, and life goes on! However, this is a job that Dr Matiang’i will do for exactly one month before we send the entire Jubilee gov’t on compulsory retirement.

Meanwhile, let nobody even imagine of milking political capital from Nkaissery’s sudden death. Since Uhuru Kenyatta has been telling the Kisii people that one of the greatest things he has done for them during his tenure is appointing Dr Fred matiang’i as a CS, I hope this latest temporary appointment is not a “favour” that the president expects the Gusii people to return in kind on 8/8. It would also be immoral to use the death of the CS to seek sympathy votes from the Maa community.

Lastly, as the country mourns the no-nonsense general, it would be prudent if someone tells the public what exactly caused his sudden demise, just to dispel any speculations. It has not escaped the keen public attention that Prof George Saitoti, the then minister for internal security, and his assistant minister Orwa Ojode perished in a nasty helicopter crash around the same time before the last general elections. The public never got to know exactly what caused the ugly accident and the painful death of the two.

However, as much as we might have had our own political differences with the late retired general, whether you support NASA or Jubilee, let us try to desist from making such differences personal. I am sure we can afford to practice mature politics if we want to. The general, just like any human being, had his own shortcomings and did what he had to do in the line of duty. May the good Lord rest the general’s soul in peace. Once a soldier, always a soldier. Salute.

One thought on “What General Nkaissery’s Sudden Demise Portends for NASA and Jubilee.”