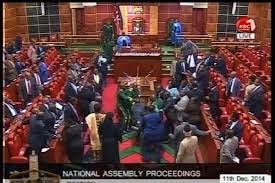 The recent shutdown of four major TV stations, belonging to three topmost media houses in the country, due to a digital migration dispute exposes the Jubilee government’s incompetency in safeguarding the citizens’ interests. The digital migration might have been intended for the common good of the citizens, in the long run, but the way in which it is being conducted leaves a very bad taste in the mouth. So many questions still remain unanswered especially in regard to the ownership of the Chinese company -PANG -that is supposed to control the digital media frequencies and why a foreign entity should be given such a big leeway to control local digital frequencies.
The first and foremost role of any government is to safeguard the rights and interests of the citizens who brought it to power and the right to access free information through their favorite TV stations in one of the most fundamental rights. However, for over two weeks now, Kenyans have been treated to substandard content disseminated by K-24 and the state owned KBC TVs which are the only main TV stations on air at the moment! This begs the question: In whose interest are the Communications Authority (CA) together with the ministry of information and technology acting?
I am sure the majority of Kenyans may not understand the intricacies involved in the digital migration wars, but they know who shut down their favorite TV channels and they also know that the courts recently threw out some draconian clauses, sneaked into the Security Act, which were aimed at gagging the media. The media may incur some losses but, unlike politicians in government, it will not be asking for votes from Kenyans come 2017. Therefore, a continued shutdown of the TV stations is likely to politically boomerang on the Jubilee government so badly. This will obviously be seen as an extension of the fight against the media, part of which has failed after the punitive clauses aimed at gagging the media were declared illegal by the courts. But whichever way one looks at it, there was no need to swiftly switch off the four stations since the international deadline for digital migration is June this year.
I don’t remember the court ruling that any TV station which had not migrated by Mid-night of the day the ruling was made, was to be shut down. What the courts ordered was immediate implementation of the digital migration, which should have seen the CA and the media houses reach an amicable agreement on how to smoothly transit from analogue to digital TV without affecting the mammoth viewership that is served by the TV stations that are currently shut down. That is why the swift shutdown was in bad faith and is suspected to be motivated by business interests that might have very powerful connections in government. For a government that is known to be so much obsessed with PR stunts, the shutdown saga comes with a very poor score in terms of PR.
That brings me to the rating, in terms of performance, of governments that have ruled Kenya since independence. David Ndii, a renowned Kenyan economist and columnist, gives a very interesting perspective, in this regard, in an article that appeared on the Saturday nation on March 1st 2015. He uses three dichotomies that define our politics to rate performance of the four regimes that have ruled Kenya since independence. Ndii rates the regimes as, Liberal or Illiberal, Corrupt or Clean and Competent or Incompetent.
He goes ahead to write that Jomo Kenyatta’s government was Illiberal, Corrupt and Competent; that of Moi was Illiberal, Corrupt and Mediocre while the Kibaki regime was Corrupt, Liberal and Competent. However he doesn’t have any kind word for the Jubilee government and here is what he has to say about it: “Uhuru and Ruto are Moi’s protégés. Not only do they seem to have internalized the politics of mediocrity practiced in Moi’s KANU but they also missed out on the education and socialization in liberal politics that the NARC coalition politicians went through in their 15 years in opposition.” Therefore, based on the three parameters, Jomo scores 1 out of 3, Kibaki scores 2 out of 3 while Jubilee, like the Moi regime scores zero.

I have always thought that I was the only person mesmerized by the raw talent exuded by sycophants as they shower praises on their seemingly perfect leaders till I read Ndii and he confirmed my fears. Referring to a government led by mediocre leaders as a “Mediocracy”, he quips that, “Sycophancy is just as critical an element of mediocracy as the leader’s insecurity. I have long been intrigued by sycophancy, mainly from observing hitherto accomplished people transform into complete idiots once they are close to power.” He goes ahead to add that “Sycophants it seems are born not made. Sycophancy is a calling. It is self actualization.” He argues that a government led by mediocre leaders is far much dangerous than a corrupt but competent one since mediocre leaders usually eat into the capital just as it happened during the Moi regime. Is the land grabbing spree, Chickengate and Rubbergate just a tip of the iceberg of what scandals we expect from the Jubilee regime? The jury is still out there.
As for sycophancy, I can’t agree with him more because sycophants are usually very much alive to the fact that their destiny is completely tied with the fate of the leaders that they vehemently defend. A sycophant is a person who is ready to take the bullet meant for the regime leaders. If you ask one of Robert Mugabe’s sycophants whether he fell down recently or not, he will tell you that he did not actually fall down even though the incident was captured on camera. He will tell you that the African strongman was just performing a clever stunt! That is a sycophant for you. That is why the highest office any sycophant can ever hold is the one occupied while he/she is a sycophant of a certain regime. The moment that regime is thrown out of power, it goes down with all its sycophants. Unfortunately, no sycophant can ever be used by two different regimes because they can’t be reused. So, by the time you decide to be a sycophant, you must have reached the apex of Maslow’s hierarchy of needs which represents self actualization.
The Jubilee regime has no shortage of sycophants, with some declaring openly that they indeed are chief sycophants. How can there be a shortage with the Duales, Kindikis and Murkomens of this world defending every wrong move of the government? These three make the sycophancy of Joseph Kamotho of the “baba na mama fame” look like child play. The saddest thing is that the best sycophants of any regime are usually highly learned fellows. Aden Duale once said that if Uhuruto told him to jump from the top of KICC and he was convinced that they had a good enough reason to do so, he would go ahead and jump!
But perhaps what has shocked me most in the recent past is what kiraitu Murungi told the Meru People recently. Talking about the new political outfit called JAP, he said that Jubilee members believe in the leadership of Mr. Kenyatta and Ruto and there is no need for them to ask questions before joining the new party. He continued to say that whichever direction the president wants them to take, they shall dully follow! In other word he was telling the meru people that they should not bother to think because somebody has already done that for them. Now this is the language of a real sycophant! Murungi’s metamorphosis since 1992, when he was among the leading lights who were championing for multiparty democracy in Kenya, qualifies for a unique political case study. This is a man who was among the first founders of the Human rights Commission, Kenyan Chapter, who once he became minister during the Kibaki regime was quoted as saying that, the problem in Kenya might as well be too much freedom! The man who arrogantly refers to his party as “Mbus” obviously has no respect for democracy and political parties. It remains to be seen whether the Meru people will ask any questions now that they have been told not to.
However, it might be a different case for the Kalenjin nation, when it come s to joining the new political outfit. Since in Kenya, parties are known to be used as political vehicles which become tools of negotiating for a stake at the high table of political power, the move to dissolve URP is causing jitters in the Rift Valley. In any coalition government the bargaining power of the political sides that form the coalition is tied to the strength of their parties. The Mount Kenya region might easily warm up to the idea of a single party for Jubilee since “one of their own” is in power. In any political merger, the smaller parties are effectively swallowed by the biggest in the arrangement. In this case, URP will effectively be swallowed by TNA.
However, pundits say that the Rift Valley people may not take the decision to dissolve their party so lightly. Already this has generated a lot of heat in some quarters with some leaders like Isaac Ruto and Zakayo Cheruiyot openly speaking against the JAP outfit. They know well that W.S. Ruto does not wield the same power that Uhuru Kenyatta wields. They also know that dissolving the party they used to negotiate for power will rob them off the only negotiation tool they have within the Jubilee coalition. With some politicians from central Kenya already planning to be running mates of Ruto in 2022 as if 2017 is already a foregone case, the Kalenjin nation will only tread very carefully. When they speak of Ruto’s running mate coming from central Kenya in 2022, it is actually very interesting that in their succession equation , these politicians are arrogantly assuming that all the other communities that are not from Mount Kenya or Central are not Kenyan enough to feature in the Uhuru Kenyatta succession politics!

One thought on “THE MAKING OF A MEDIOCRE REGIME, AND THE RETURN OF A THRIVING TALENT OF SYCOPHANCY.”