OUR SOCIETY IS SICK; IN FACT CRITICALLY ILL. 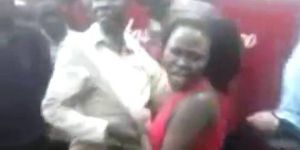 Has the society neglected the boy child so much that it has turned him into an aggressive psychopathic monster? Recently, “men” (note the quotes) have been in the news for all the wrong reasons. Cases of “men” stripping and humiliating women whom they consider to be indecently dressed have been on the rise in the country. Similarly, instances of fully grown “men” defiling young children, including their own, are becoming very rampant. Even in the jungle, predators spare young preys!

Such “men” must be having a deeper psychological problem than we think. I insist on the quotes since real men don’t undress women in public. They gently do it in privacy, without having to use any force. Those who do this are suffering from an irreversibly warped masculinity. How come our forefathers never used to strip women even though most of them used to walk with bare chests, covering only the most private parts of their bodies with animal skin? This is an obvious pointer that something is seriously wrong in society. So when did the rain start beating us?

For starters, with the modernization of society, the power hierarchy of the past has been totally upset. With civilization putting emphasis on affirmative action, women have become increasingly assertive while a good number of men feel more and more threatened and sidelined hence weak inside. Men used to enjoy the monopoly of physical power over women but modern power is no longer in the muscles; it is in the intellect and the pocket or in the bank account! Man’s authority is increasingly diminishing as women are nowadays capable of all that a man can do, except being a biological father. Our forefathers may be regarded as an uncivilized lot, but they were much happier than the majority of modern men. They never felt threatened by women. They easily got what they wanted from women.

Since women have reinvented themselves as very assertive and strong willed creatures, who are in complete control of their own destinies, some men are missing out on things as basic as conjugal privileges that our forefathers used to take for granted. Women have even, to a great extent, managed to put a marriage curfew around men that restricts them to a one woman one man rule which never used to be the case in traditional society.

It goes without saying that weaklings in society have no chance of getting female mates of their choice and the muscle of modern society happens to be money. As the good old book says, “Money is the root cause of all evil” and whatever is happening now has some connection to do with having or lack of it. Just look at who has been stripping women and raping children! A quick check reveals that the culprits are sexually starved Weaklings who easily form the rejected scum of society. They are fellows who are not financially well off, usually living off hard and frustrating menial jobs like touting or they are unemployed and “tarmacking”; the main reason why they are found idling around bus termini. They obviously can’t afford to keep any desirable woman of substance.

Men are natural students of Robert Greene when it comes to power. In the 36th law of his famous book “48 Laws of Power,” Mr. Greene advises that; “Disdain things that you can’t have: Ignoring them is the best revenge.” Men who strip a woman do it instinctively since they know well she is beyond their reach; hence they not only treat her with contempt to cover their embarrassingly lustful thoughts, but they physically harass her too. These men are sexually starved perverts with weird fantasies about women. They think of women as sex objects. They are devastatingly stunned whenever they see a sexually provocative woman. The lustful desire that engulfs them momentarily suspends their logical reasoning capabilities. This gets worse if such a spell is cast on a group of more than five perverts. Their minds instantly switch into “sync mode” whereby it only takes one of them to master enough courage to give them the cue and they are instantly all over their prey. It is a known fact that mobs don’t think; they act under a collective and powerful whimsical spell . By the time the spell is broken and each starts thinking as an individual, it is too late for the victim.

The attackers will most likely melt into thin air after their act because they are now acutely aware that what they’ve done is wrong. Whether we like it or not, such psychopaths will always roam our streets. They are sick and seriously so. Deep down, they feel worthless and what they exhibit is misplaced aggression. They need rehabilitation in the cells where they are likely to end up. This will help them to not only develop a paradigm shift on how they view women but help them to start doing something worthwhile with their own lives; which will help make them feel significant and appreciated in society. Any worthwhile man can still get a woman of his choice in modern society. He has no time to participate in public stripping sprees since he is too busy doing important things in society and making more money. Isn’t it high time we started affirmative action for men?

Meanwhile, as ‪#‎MyDressMyChoice‬ gains momentum, none other than his excellency the president of Kenya has advised that your security starts with you; in other words, you are on your own when you come face to face with this marauding perverts. Personally, I don’t mind whether you step out in a belt-sized micro-mini skirt or in a dress the size of a tent, but before you do, think of the kind of attention that you are going to court and decide whether you really need it. Woe unto you if you court the wrong attention in the wrong places. You have been warned by the president that we cannot have a police officer for every citizen and even if it were to be so, these attacks take two to three minutes. The perverts may end up in jail but you will have gone through an horrendously traumatizing experience that will leave you with a lifetime psychological scar. ‪#‎ChoicesHaveConsequences‬ and this applies to both the victim and aggressor. Like